What is a bastide ?

Not an ordinary village

The texts on those pages are based on the information found in the Encyclopaedia Universalis, on Monflanquin.fr, PatrimoineMonflanquin.fr and Wikipedia sites; and the book ‘Musée des Bastides’, published by the Town Hall of Monflanquin.

Why were the bastides founded?

Between 1220 and 1370, the South-West was shared between the French (the Capétiens) and the English (Plantagenets). The Capétians and the Plantagenets tried to establish their political and economic power. The 2 monarchies created nearly 300 new towns, the bastides, where there were first only scattered settlements.

During history, certain bastides changed ownership several times; sometimes they were French, and then they became English again. Like Castillonnès ! Alphonse de Poitiers (who also founded the bastide of Villeréal) granted the ‘charte des coutumes’ to the bastide in 1266. But a few years later, Edward II of England, Duke of Aquitaine, annexed many towns from the bailiff of the Agenais and Castillonnès became English in 1318. In 1368, Edward of Woodstock, grandson of Edward II and also called the Black Prince, confirmed the ‘charte des coutumes’. The bastide became French again a few years later, in 1372, when Louis d'Anjou renewed the charter.

The bastides were centers of settlement and trade. They were intended to bring together peasants, traders and merchants to develop and make use of agricultural land and occupy a most wanted territory.

The word bastide does not have the same meaning in the south-west of France as in the south-east of the country !

The characteristics of a bastide.

Here are some criteria that define what a bastide is:

The fact that the market is located on the central square, instead of the church (located on another square, east of the main square) also demonstrates the relatively secular character of these new towns. Trade was the central element of the bastide: in Villeréal for example, the market was established in 1288.

The ‘charte des coutumes’ (charter of rights and duties) 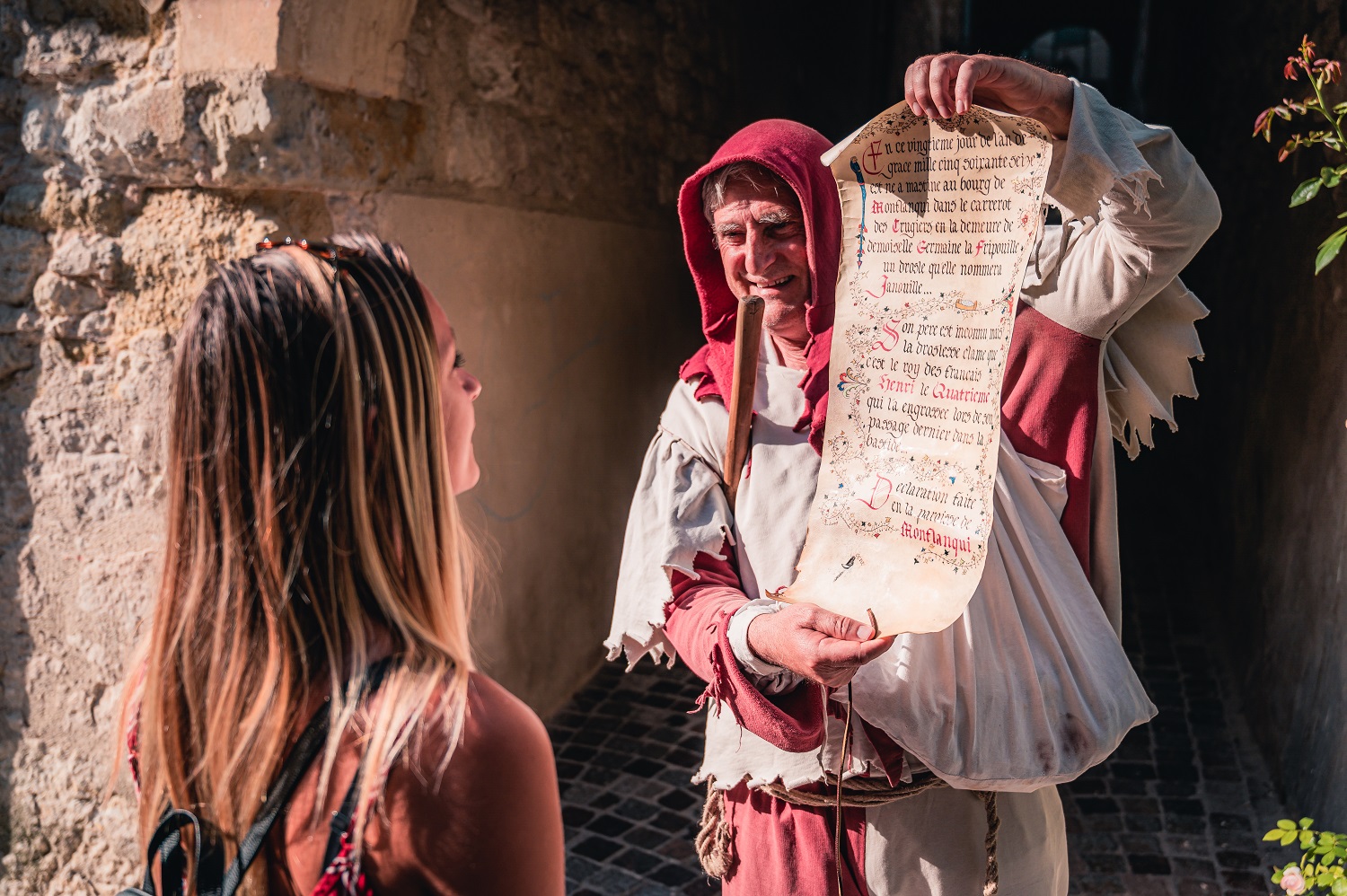 This charter is a social contract which organised life in the community by demarcating the rights and duties of each person. It is a kind of constitution before its time!

It also meant the end of fiscal arbitariness ; precise, regular and moderate taxation was installed. Property tax was linked to the size of the land that was built on and the size of the cultivated land (the cens), and there was a tax for goods.

The trade rules were the same for everyone, and they were strict: for example, the products on sale were obligatorily weighed beforehand. This made it more difficult to cheat on customers.

The organization of the city: an original and very regular street plan 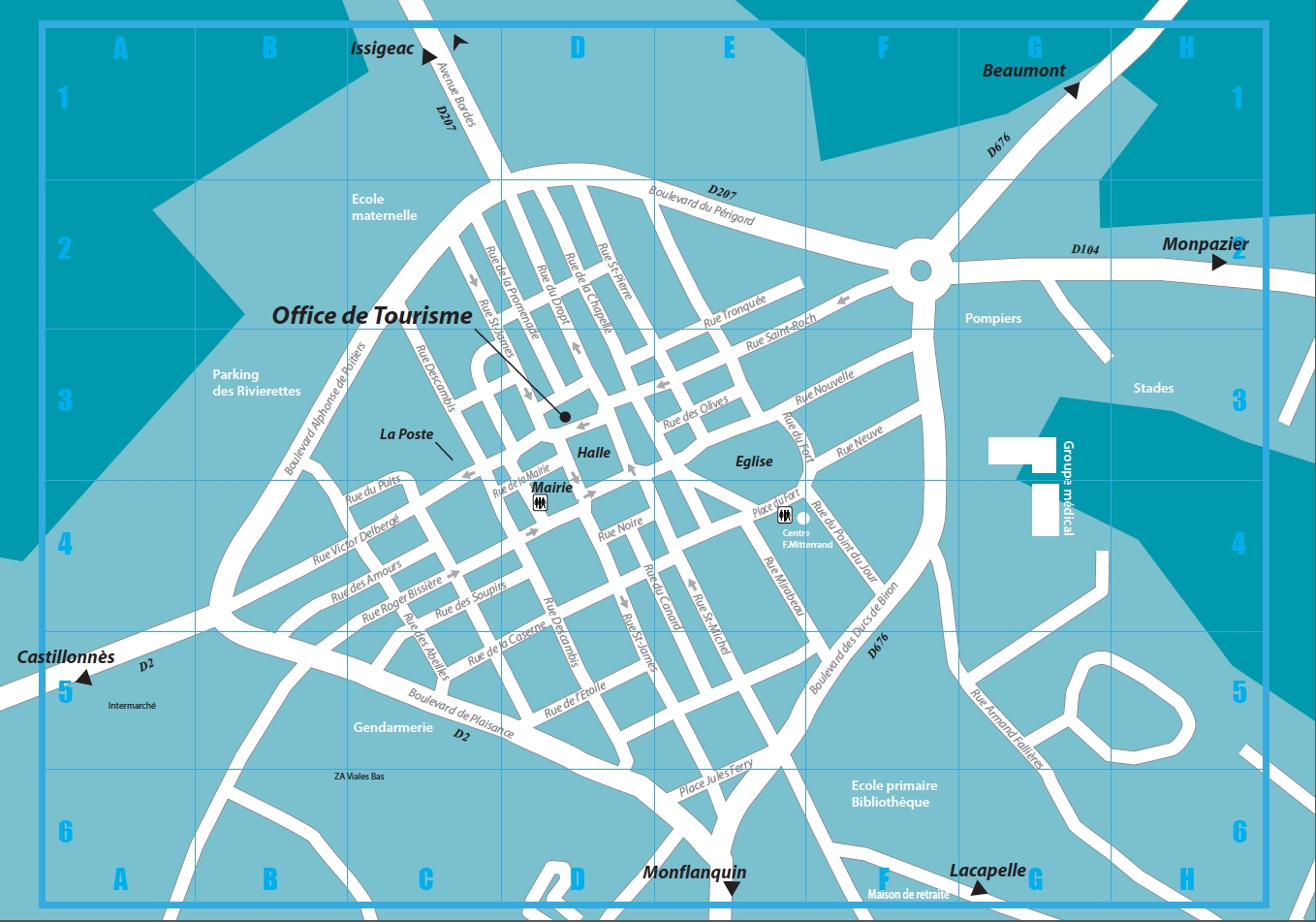 The street plan of the bastide is an innovative urban form although the orthogonal layout of its roads also reminds us of Greek urbanisation and later the Roman and Gallo-Roman urbanisation style.

A bastide has, lengthwise, 1 to 8 streets. This number varies with the size of the bastide. A village or town with a classic checkerboard plan has at least 4 parallel streets.

The roads have, most of the time, an earthen surface, but sometimes they are covered with cobblestones or pebbles. They have two slightly sloping sides, sloping towards a central gutter.

A bypass, wider than the others, surrounds the town. It connects the bastide to the other bastides/villages, in all directions.

Then there are the main streets, the streets for the carts  - the ‘carrièras’ in the Occitan language – that run along the facades of the houses. They are wide enough to allow the passage of carts (6 to 10 meters wide). They are often the longitudinal axes of the bastide.

The side streets, called transverses or traverses, are 5 to 6 meters wide. 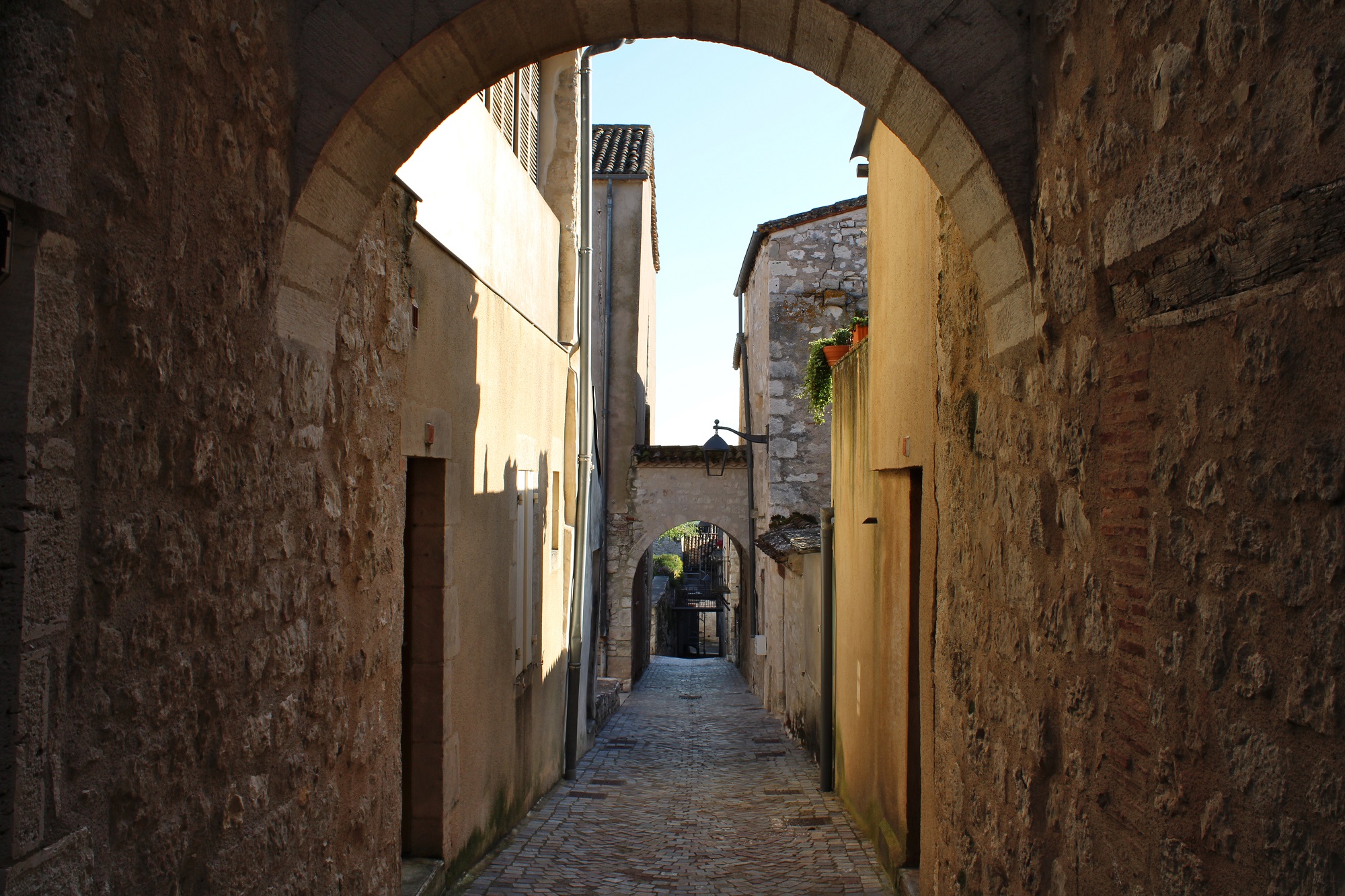 Then there are the narrow alleys (‘carrerots’) where only pedestrians can walk. They are the only access to houses that had no entrance in the streets, unlike the houses on the square. At nightfall, you could meet the girls of easy virtue there ...

Finally, the ‘andrones’ were designed between houses in order to evacuate rainwater and wastewater. The inhabitants also threw rubbish in there, so the rats started to settle in…

The building plots are divided into regular plots of 8 by 24 meters on average and are called ‘ayrals’. Several ayrals formed a sort of islands (or ‘moulons’). Bastides of the same size had ‘islands’ of a similar size. A simple proportion was used for the width and length of the ayral, often in a ratio of 1 to 2 or 3. 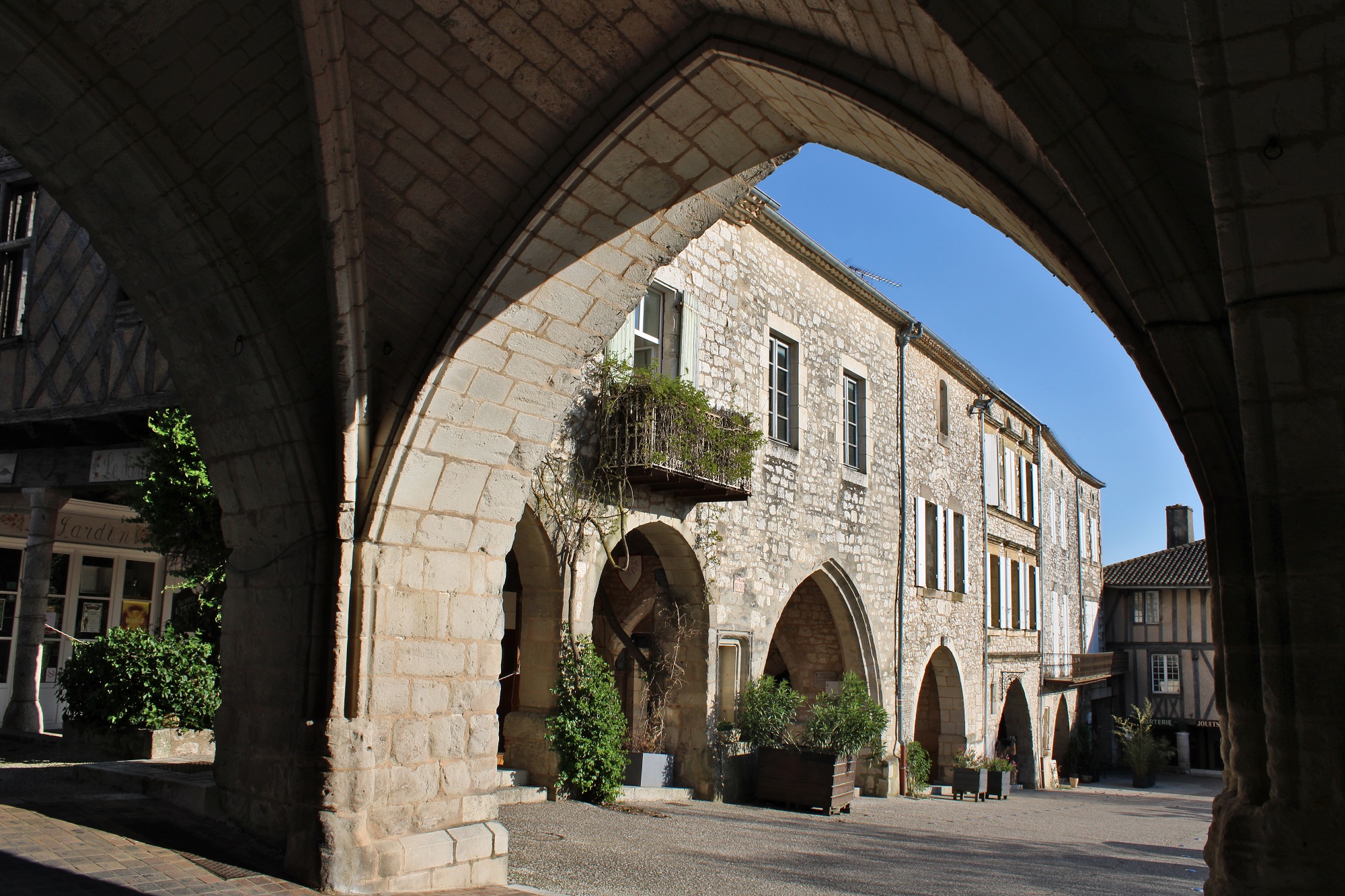 Nowadays, we only know the central squares with arcades, as in Monflanquin. But the houses on those squares may not always have had arcades: it is believed that the owners, at a certain moment, decided to make the living area bigger by enlarging their house a few meters towards the square and in that way create one or two floors. This is how the arcades would have been build; and with them the angles (the ‘cornières’) that are now the corners that give access to the square.

To find out more about the bastides, visit the Bastide Museum in Monflanquin!